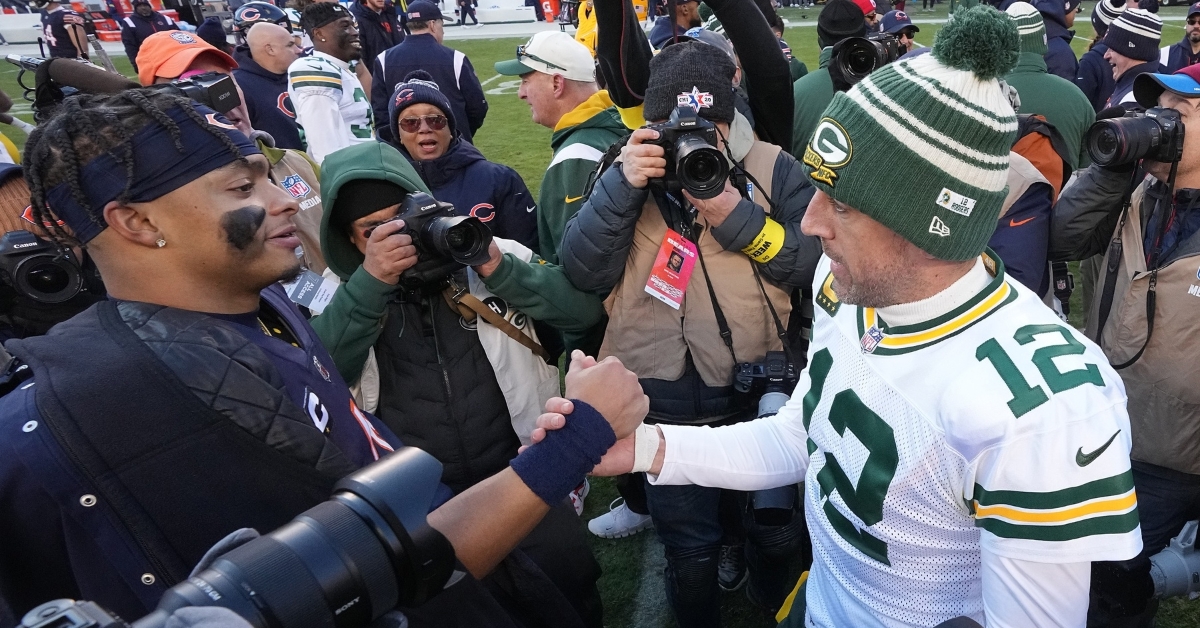 CHICAGO - "I OWN YOU, I Still Own You!" When Aaron Rodgers screamed those words out against the Chicago Bears last season, it rubbed Bears fans the wrong way. Although they may have seen it as a sign of disrespect, he is not wrong, as he is 24-5 against the Bears all-time and 11-1 over the last six years.

When you are having that kind of success against one team, there are many things you are doing right, but a lot of luck has to be involved as well. Luck was certainly on the Packers side on Sunday as Green Bay trailed the Bears 19-10 heading into the fourth quarter. That was until a missed field goal, and two interceptions by Justin Fields flipped the game on its head as the Packers scored 18 unanswered points to complete the comeback win 28-19.

This is especially painful to swallow when you consider Fields had his best overall game of the season. Not only did he rip off a 56-yard TD run and 70 yards on the ground, but he completed 20-25 passes for 254 yards. However, despite the overall improvements in the passing game, the mistakes are still magnified as he didn't throw a TD pass, while his two late-game interceptions sealed the deal for Green Bay.

With a chance to move into third place in the NFC North and take over the all-time lead in wins, Chicago was very inspired early, and the Packers felt their wrath early. Led by Equanimeous St. Brown and his massive first half, the Bears used a big 11-play drive on their opening possession, resulting in a Cairo Santos field goal for the 3-0 lead.

Looking to step up in their own right, the Bears defense came out strong and delivered a strong showing for three quarters. DeAndre Houston-Carter came through with a massive tackle for a loss on the Packers opening possession, which gave the ball back to the offense. Five plays later saw the Bears take a 10-0 lead as Fields showed off his wheels for the 56-yard scamper. Fields not only leads QBs in rushing yards, but is ranked in the top five in the NFL, as he will most likely top 1000 yards this season.

It took the Packers offense a little bit to get going, but when they got the ball back following that touchdown, they took seven minutes off the clock and used 13 plays to get on the board. Allen Lazard came up with a massive reception before AJ Dillon started to get more involved. Fortunately for the Bears, their defense came through when they needed to, holding the Packers to a 30-yard field goal.

Miscues were the theme for the Bears all game long, and after Fields hooked up with Chase Claypool for 15 yards, it was the Packers forcing a fumble and taking over from there. Chicago then came through for the second consecutive drive as they allowed just 24 yards on five plays before forcing a turnover on downs to get the ball back.

Two plays later, the lead grew to 16-3, with Fields going up top to St. Brown for 56 yards before David Montgomery punched it in from seven yards out. Santos would miss the extra point, but the Bears still had a nice lead. With less than seven to play in the first half, it was time for the Packers offense to go to work again, and they used nearly the rest of the quarter and 13 plays to wear down the Chicago defense.

Lazard came through with an excellent first-down reception early on while Dillon started picking up large chunks of yardage on the ground. Add in several runs from Aaron Jones to set things up for Rodgers, and it was the rookie Christian Watson coming down with a 14-yard TD reception for his seventh TD catch in the last four weeks. That was the half's final points for either side as the Bears held a rare 16-10 lead at the break.

It was a tale of two halves for the Bears and their offense, but it was also a slow start for both sides as the first three possessions of the second half saw 15 total yards of offense and three punts between the two. Looking to build on their lead, the Bears put together their longest drive of the day by taking eight minutes off the clock and using 12 plays to get it done.

Montgomery got things started on the ground, which opened things up for Fields to find Cole Kmet for a massive gain over the middle. Another big run and a first down reception by Dante Pettis moved the ball inside the 15, but the drive stalled with Santos connecting on another field goal to make things 19-10.

For as good as the Bears defense played all game long, the ensuing Packers drive was not their best effort as a short kick, and two big runs from Dillon and another Watson completion had the Packers offense humming. That set the stage for a costly pass interference call to move the ball into Bears territory, followed by a 21-yard Dillon run to pull Green Bay within 19-17.

Knowing they would need more points on offense, Fields and the offense continued to go to work as N'Keal Harry hauled in a big play on the Bears next possession. Three plays by Montgomery followed that to set up a 40-yard field goal try from Santos, but the Packers special teams unit blocked that attempt keeping things 19-17.

It was that play where the game completely changed as the momentum was suddenly on Green Bay's side. Following that blocked field goal, the Packers put together a long 13-play drive headlined by Dillon and finished by Crosby putting the Packers in front 20-19. As if a blocked field goal wasn't bad enough, Fields was intercepted by Jaire Alexander five plays into the Bears next drive, and just like that, it was the Packers ball.

Three plays later, it was a 26-19 lead, with Watson not only bringing in a long pass from Rodgers but also racing to the endzone for the 46-yard rushing score. Instead of kicking the extra point, the Packers offense remained on the field as Rodgers found Mercedes Lewis for the two-point try to make things a two-possession game 28-19.

That would be all the Packers would need as the Bears wasted a long Velus Jones kick return with Fields getting picked off for a second time in as many possessions to seal the win for Green Bay. It was a painful ending to a great game, but again, Rodgers and the Packers came through when it mattered.