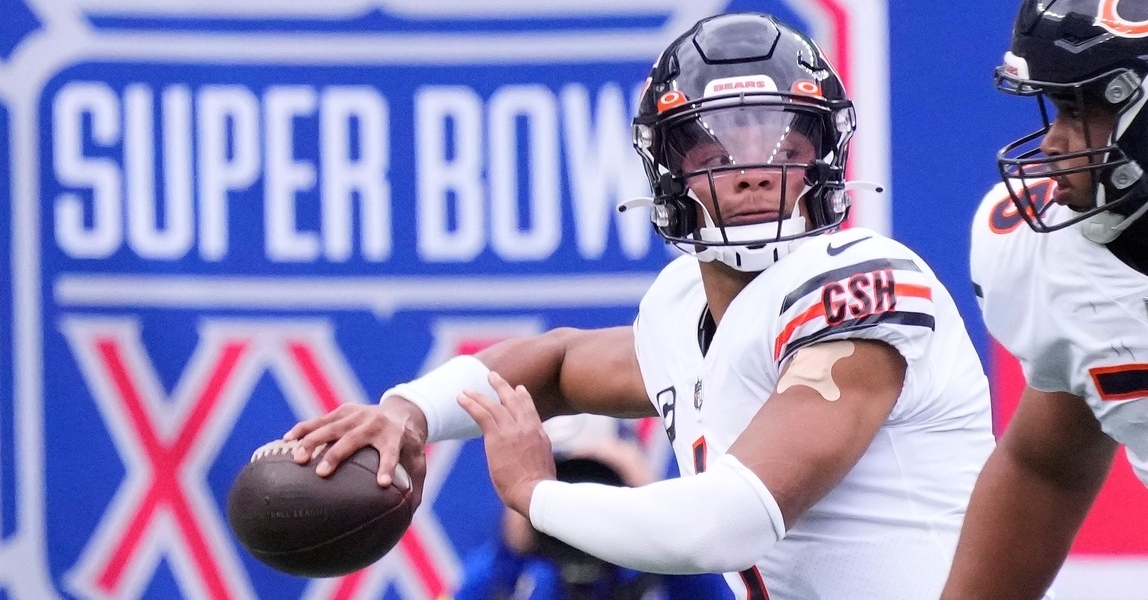 NEW YORK - I don't want to jump the gun quite yet, considering how the NFL season is just four weeks, but at some point, you have to wonder if the Chicago Bears (2-2) will consider a change at QB. This is not just a week issue for Justin Fields and learning a new offensive system. This goes all the way to last season, where Fields never developed at the rate the Bears wanted him to, and now that has translated over to this season.

Facing off against New York Giants (3-1) team that has looked much better under rookie head coach Brian Daboll, neither of these teams are great and could be the worse 2-1 teams in the league entering the week. Even with Daniel Jones going down with an injury going down with an injury in the second half and Tyrod Taylor coming into the game, Chicago still was not able to capitalize on the situation and fell to the Giants 20-12.

Fields was a bit better offensively, passing for 163 yards, but when you take six sacks and complete less than 50% of your passes, things will not go well for you. Yet somehow, the Giants had fewer passing yards as they threw for just 71 yards as a team, with Saquon Barkley and his 146 yards on the ground spearheading a Giants rushing attack that nearly topped 300 yards.

Despite all their offensive struggles, the Bears were off to a great start, offensively scoring on their first two possessions. Granted, both were field goals from Michael Badgley, but the Bears ran 16 plays and had 132 combined yards on those drives. Fields showed off his arm and legs on their first possession, hooking up with Darnell Mooney for 18 yards before running for another first down. Chicago closed out that drive with a 29-yard field goal and took a 3-0 lead.

The Giants wasted no time taking the lead on their next possession, needing six plays and three minutes to go 75 yards. Barkley played a role in that with his legs, as did Jones by picking up some excellent short completions before getting in the open field for the 21-yard touchdown run for the lead. Spearheaded by a 56-yard pass from Fields to Mooney on their next possession, the Bears had the ball in Giants territory again, but had to settle for the 22-yard field goal from Badgley to pull the Bears within 7-6.

After their defense forced another Giants punt, the Bears offense had the ball moving again and threatened for more points. Trestan Ebner was starting to get involved on the ground, as was Fields again to churn up plenty of yardage. You also saw guys like Cole Kmet and Khalil Herbert get involved in the passing game only to see that drive end with a strip sack fumble recovered by Kevon Thibodeaux.

The Giants then went on to turn that turnover into points needing just over four minutes to go 75 yards. Having a guy like Barkley run for nearly 40 yards on the drive did help, but Jones made several nice throws to bring the ball inside the red zone. Like their first touchdown drive, Jones capped things off with his legs plunging in from eight yards to extend the Giants lead to 14-6.

Things were starting to look bad for Chicago as a quick punt saw a change in possession, only to have the Giants fumble the punt to give it right back to the Bears offense. These are the drives that Chicago needs to capitalize on to get things going offensively, but had to settle for another field goal to make things 14-9 at the half.

Fortunately for the Bears, they started the second half with the ball and chipped away at the Giants lead a bit more. Fields found Trevon Wesco for 23 yards to open the drive as Chicago moved the ball near midfield. Fields would find Mooney later on the drive for another significant gain, with Herbert ripping off a big run to move the ball inside the Giants 20. As usual, some questionable play calling from Luke Getsy in the Red Zone forced another drive to stall, with the Bears taking another field goal to pull within 14-12.

The problem for Chicago was those would be the last of their points for the day despite their defense playing near lights out. For the most part, the Bears defense held their own in the passing game, which is why they ran for nearly 300 yards. However, a costly 40-yard pass interference penalty from Kyler Gordon put the ball in position for Graham Gano to bang home a 44-yard field goal to make things 17-12.

Following another Bears punt, there was a change at QB for the Giants, with Taylor coming for the injured Jones. Chicago rose to the occasion with Eddie Jackson picking up his third interception on Taylor's first passing attempt of the game. Once again, the Bears couldn't do anything with that turnover and gave the ball back to the Giants.

Looking to put the game away potentially, New York orchestrated a 13-play drive where Taylor completed his only pass of the game to Darius Slayton. Apart from that, it was all runs, with a 43- yard field goal from Gano making things 20-12. The rest of the game saw the Bears pick up 32 yards of total offense and a muffed punt from Velus Jones to give the ball to New York, only to see Gano miss that field goal.

Either way, this will be a tough loss for the Bears and their fans to follow as the Chicago offense continues to be lifeless throughout the first four weeks of the season. Starting in place of the injured David Montgomery, Herbert put together another solid effort as he led the way with 77 yards on the ground, with Fields adding 52. Mooney broke out of his early season slump to come away with four receptions for 94 as he amassed more yards than the entire Giants team.