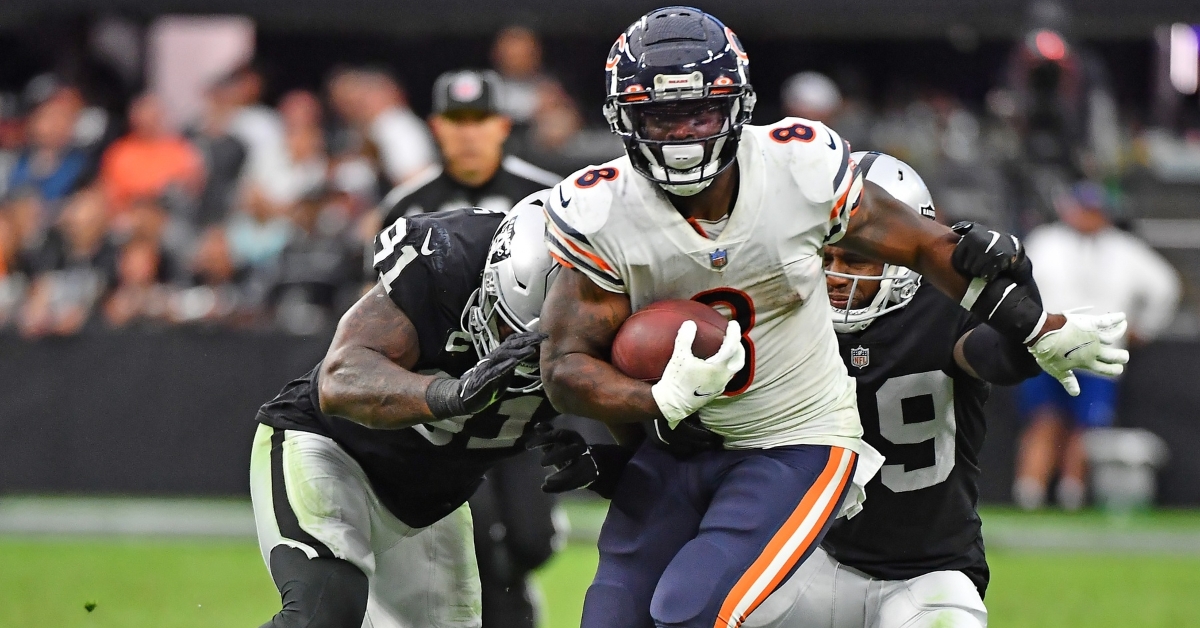 The Chicago Bears looked like a much better football team on Sunday, stringing together their second straight win after beating the Detroit Lions last week. The Bears are now 3-2 after traveling to Las Vegas and beating the Raiders 20-9.

So let’s take a look and give out some grades based on the performances by position after the win against Las Vegas.

Justin Fields got his third career NFL start on Sunday, and it was much better than the first. Fields delivered some big throws, including some deep play shots that the Bears sometimes struggle to make. Fields was 12-of-20 for 111 yards and his first career passing touchdown on Sunday. Rushing-wise, he was only able to muster up four yards on the ground. Fields also fought through a few injuries during the game and only missed a play or two. This is his job now, and he showed on Sunday that he deserved it.

With David Montgomery out, it was a combination of Damien Williams and Khalil Herbert who carried the workload on Sunday. Williams had 16 carries for 64 yards and a touchdown. He also caught two passes for 20 yards. Herbert racked up 18 carries for 75 yards, getting the ball in some key spots in the second half. The Bears certainly need to keep them involved as much as possible.

Only three Bears wide receivers caught passes on Sunday, but the ones who did got the job done. Allen Robinson had four catches for 32 yards, which wasn’t the best the Bears had to offer. Second-year wideout Darnell Mooney caught three passes for 35 yards. Marquise Goodwin also was targeted one time, which was completed for eight yards.

This unit certainly has talent, with Cole Kmet and Jimmy Graham handling the tight end duties for this squad, but they’ve been quiet this year. This unit was better on Sunday, though, with Kmet catching two passes for 22 yards. Graham was not targeted, but JP Horsted caught a touchdown. I’d like to see more out of this unit as the year progresses.

The offensive line was better, allowing just two sacks of quarterback Justin Fields and creating holes in the running game all day long. It was against the Raiders, but it was a step in the right direction on Sunday.

The defensive line was solid, keeping the Bears in this game and pressuring Derek Carr and the Raiders. The unit only allowed 71 total rushing yards. This unit was without Akeim Hicks to injury, though, so we’ll keep an eye on that as time goes on.

Any unit that boasts Khalil Mack deserves some props, and this position group certainly delivered on Sunday. Khalil Mack had a sack, his sixth of the season. Trevis Gipson also had a sack. Roquan Smith had ten tackles as well. This unit is very good and looked like it on Sunday.

This unit was good on Sunday. The Raiders came into the week as the AFC’s top passing attack, and the Bears held them to 188 yards. There were no glaring pass plays that gashed the secondary, Eddie Jackson, Jaylen Johnson, and co. continued to play good ball. Deandre Houston-Carson picked up the game’s only interception, and Tashaun Gipson had a sack, as this unit continues to stay involved.

Kicker Cairo Santos delivered two made field goals for the Bears and made two extra points. The return game was solid with Jakeem Grant Sr., and the punt unit was active, punting the ball five times, two inside the twenty.

The play calling was much better on Sunday, mostly because Matt Nagy’s incompetence was not calling plays; it was Bill Lazor instead. The Bears finally got Justin Fields moving and allowed his skillset to show — as well as pounding the ball with the run game. More of that all would help the Bears exponentially as the season continues.

Nonetheless, week five is in the books, and the Bears are 3-2. They enter a very tough part of the schedule, which includes the Packers this week.