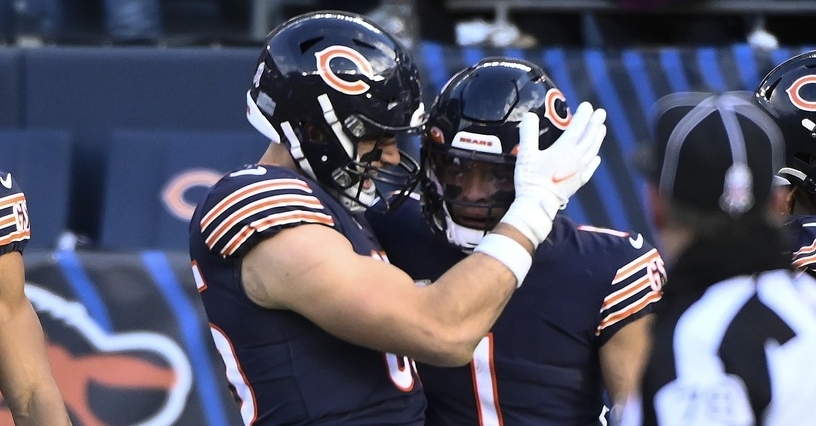 Despite the loss to the Eagles, Justin Fields still put up good numbers for fantasy players. However, with Khalil Herbert coming off of injured reserve (IR) and Chase Claypool being doubtful, and Equanimeous St. Brown being ruled out with a concussion, the Bears are running out of players that can be started in fantasy football.

Fields is the only player for the Bears that can be consistently started in fantasy football. He is one of the top players at his position, primarily because of his rushing ability. He had 95 rushing yards last week against the Eagles, who came into that game as the second-best rushing defense in the league. Buffalo is ranked No. 6 in the NFL in rushing defense, but that clearly will not stop the Bears from running the ball. Fields is also consistently scoring touchdowns, whether through the air or on the ground. In fact, Fields hasn’t had a game without a touchdown since Week 4 against the Giants.

David Montgomery - Start in Some Leagues

With Herbert coming back from IR, this will most likely decrease the rushing yards that Montgomery will have. However, the Bears are running very thin at wide receiver, and Montgomery has been getting more involved in the passing game. He had three receptions for 38 yards and a touchdown against the Eagles last week, and he has now had at least one reception in the last seven games. While fantasy players probably have better options in 8-team, or perhaps even 10-team leagues, Montgomery does offer more of an upside in half or full point-per-reception (HPPR or FPPR) leagues.

Herbert is a risky start coming off of IR. While he averaged 9.3 carries per game in Week 5 through 10 where he and Montgomery were sharing the backfield together, it’s unclear whether Herbert will have that kind of impact this week against Buffalo. Nonetheless, Herbert is someone that should potentially be picked up in the event that he is seeing that volume. Furthermore, with the Bears thin at wide receiver, perhaps Herbert will get more receptions as Montgomery has. With the fantasy playoffs in full swing, it is always a good idea to keep potential breakout players around in case of an injury.

Tight ends are still pretty inconsistent around the NFL, but Kmet seems to have established himself as the top receiver right now for the Bears. In fact, among active players, Kmet leads the Bears in receptions, receiving yards, and touchdowns. Chicago played the best passing defense in the NFL last week, not giving them much of an opportunity to pass the ball. Despite that, Kmet had the most receptions with four out of anyone on the team. This clearly gives Kmet more of an advantage in HPPR and FPPR leagues. Buffalo’s passing defense isn’t nearly as good as Philadelphia’s, ranking No. 18 in the NFL. So, Kmet should get more receiving yards than he did last game and maybe get in the endzone for the first time since Week 10 against Detroit. The only thing that could hurt that is the 22 mph winds expected for the game, but with the volume of receptions he is getting, this shouldn’t be too much of a problem for Kmet.

Dante Pettis - Start in some Leagues

While Pettis has not done much for the Bears or fantasy, if you are desperately in need of a wide receiver, Pettis may be an unexpected bright spot in fantasy. Among the Bears active wide receivers, he is leading in receptions and receiving yards, as well as being tied for the most receiving touchdowns with Byron Pringle. Pettis was targeted four times last week, his highest since Week 8 against Dallas. Thus, his target share is increasing with more receivers being out and since St. Brown is now out this week, Pettis has the potential to get even more targets than he did last week.

Speaking of Pringle, he did have Chicago’s only receiving touchdown by a wide receiver last week. But, the Bears have been very inconsistent with who gets the touchdown receptions this season. He is also getting a lot less targets than other receivers such as Pettis, as well as only having seven receptions total. While Pringle may be more be a more attractive option than Pettis, he should not be started as he isn’t involved enough in the offense to be relied on to score.