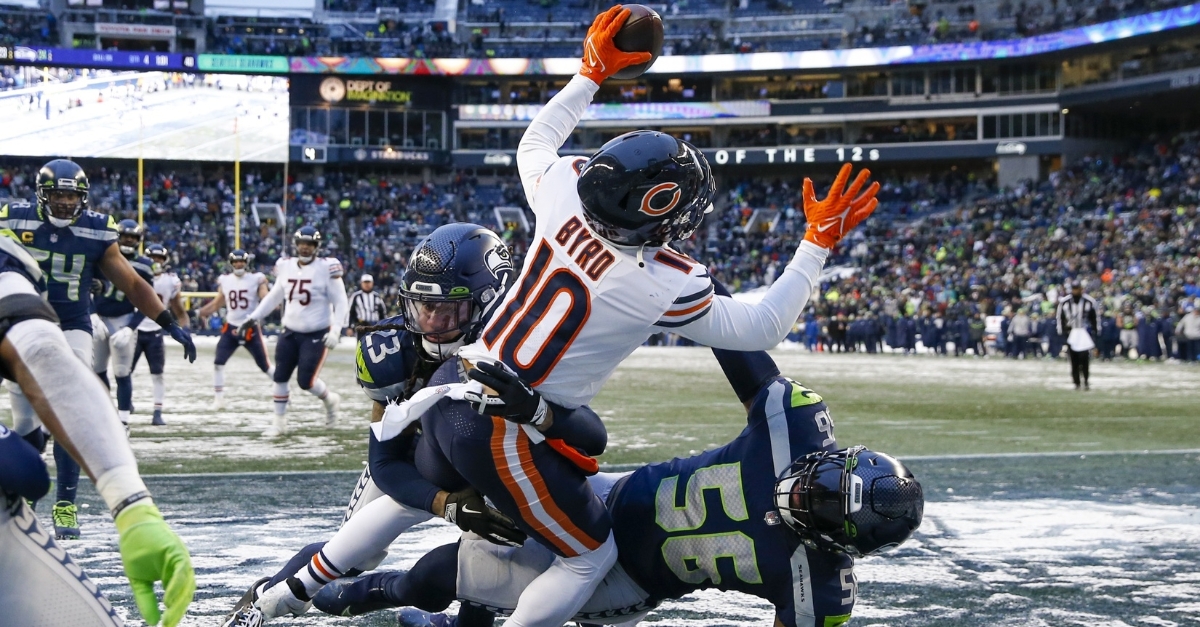 Let us be one of the last to wish you happy holidays and hope you had a wonderful Christmas. The Chicago Bears certainly had a great holiday weekend as they traveled to Seattle to take on a reeling Seahawks team. If playing on Christmas weekend wasn't good enough, how about playing in a winter wonderland as below-freezing temps and snow blanketed the Seattle area all afternoon.

Granted, it wasn't a lot of snow; the field looked like Soldier Field this time of year instead of Seattle. With that being said, the Bears still had a job to do which was trying to win a football game. After it was announced that Nick Foles would be the starter, you got that sense that fans were losing confidence by the second as that is the last option they want to hear.

For most of the game, the Bears offense looked like they have all season as they got next to nothing going through three quarters outside of one or two big plays. Trailing by 10 in the fourth, not only did the Bears defense start to stiffen up, but Foles began to put the team on his back and do what he does best when his back is against the wall.

Not only did he lead the Bears to two scoring drives in that quarter, but the second happened to be a late-game touchdown to Jimmy Graham to pull the Bears within one. Instead of taking the extra point and trying their luck in OT, Matt Nagy got aggressive and elected to go for it on fourth down. That proved to be a good strategy as Foles found Damiere Byrd in the back of the endzone for an incredible catch to lift Chicago to a 25-24 win.

Here are some takeaways from that victory:

The last three years have been a roller coaster of emotions for Foles and haven't gone the way he had hoped. After helping the Eagles to consecutive playoff appearances and leading them to a Superbowl win, Foles signed a lengthy contract to become the Jacksonville Jaguars starter in 2019. After just one game, Foles broke his collarbone and missed the team's next seven games as Gardner Minshew was put in as the starter.

Once that injury was healed, Foles tried to return to the field, but he was benched for the remainder of the season after two lackluster performances. The following offseason saw Foles packing his bags and heading north to Chicago, where he would be the backup to Mitch Trubisky. It took three weeks for Foles to get into a game, but things were not all that bad as he started the season 2-1 as a starter and led the Bears to a comeback win during that stretch.

After that, Foles was in free-fall mode, losing his next four starts under center and injuring his back during the process that saw him play limited snaps the remainder of the season. With the Bears drafting Justin Fields this season and signing Andy Dalton, not only did Foles see his name fall to No. 3 on the depth chart, but he knew it would be hard for him to see the field in any capacity this season.

He didn't let that bother him, and after 15 weeks, Foles finally got an opportunity as he was announced the starter for week 16. Not only did Foles deliver, but he had one of those classic Foles moments where he comes through in the clutch. With the Bears eliminated from playoff contention, it will be interesting to see if they let Foles finish the season as the starter to perhaps audition for a new gig.

Almost there for Quinn

Robert Quinn continues to chase history as he entered Sunday, needing two sacks to break the organization's single season sack record. Against a subpar Seattle offensive line, you had to like his chances to at least get multiple sacks as Russell Wilson has been under duress all season. Without Khalil Mack on the other side, teams know where the pressure is coming from, thus allowing them to double and triple-team Quinn.

The Seahawks did a great job against Quinn, holding him to just two tackles in the game, with one of those being a sack. That means with two games left, Quinn needs just .5 sacks to tie the Bears single-season sack record and one to break. Looking at the next two games for Chicago, and they will get the New York Giants and Minnesota Vikings. Neither of those teams has the best offensive lines, so 20 sacks could be a real possibility for Quinn.

Breaking the record is not something Quinn had in mind when the season started, but now that he is this close, you know he wants it. As bad as he wants to get it out of the way, breaking the record at home would be icing on the cake. Quinn has a shot at doing that next week, and I expect that to happen early.

How will Allen Robinson be remembered in Chicago

Four years ago, when the Bears signed Allen Robinson as a free agent, the goal was to have him become the team's go-to WR. After losing Brandon Marshall and Alshon Jeffrey in the span of two seasons, Chicago lacked a true No. 1 in the receiving core, and Robinson was brought in to be that guy. After putting together several good seasons with the Jaguars, Robinson came to Chicago and broke out during his first three seasons.

Across three years, Robinson had more than 300 receptions and 3000 yards receiving, as he did more than enough to prove he is a No. 1 receiver in this league. Still, some fans were not sold on him as they felt he was a No. 2 thriving in a system that still lacked a No. 1. After three great years of Production, Robinson made it known that he was looking for a long-term deal with Chicago to get that financial security he was looking for.

Not only did the two sides not reach a deal last offseason, but Robinson took the franchise tag this season in hopes of proving his worth once again. Instead, Robinson has endured the worst season of his career as injuries, and the emergence of Darnell Mooney has taken away his touches.

Heading into week 17, Robinson barely has 300 yards receiving with just one touchdown this season. That is a far cry from his previous three years and makes you wonder if the Bears knew something, which is why they didn't sign him. One of the more consistent receivers in terms of production the past four years, Robinson was also a drama-filled player the last two offseasons. His tenure with Chicago is all, but over and it will be curious to see how fans remember his time with the Bears.