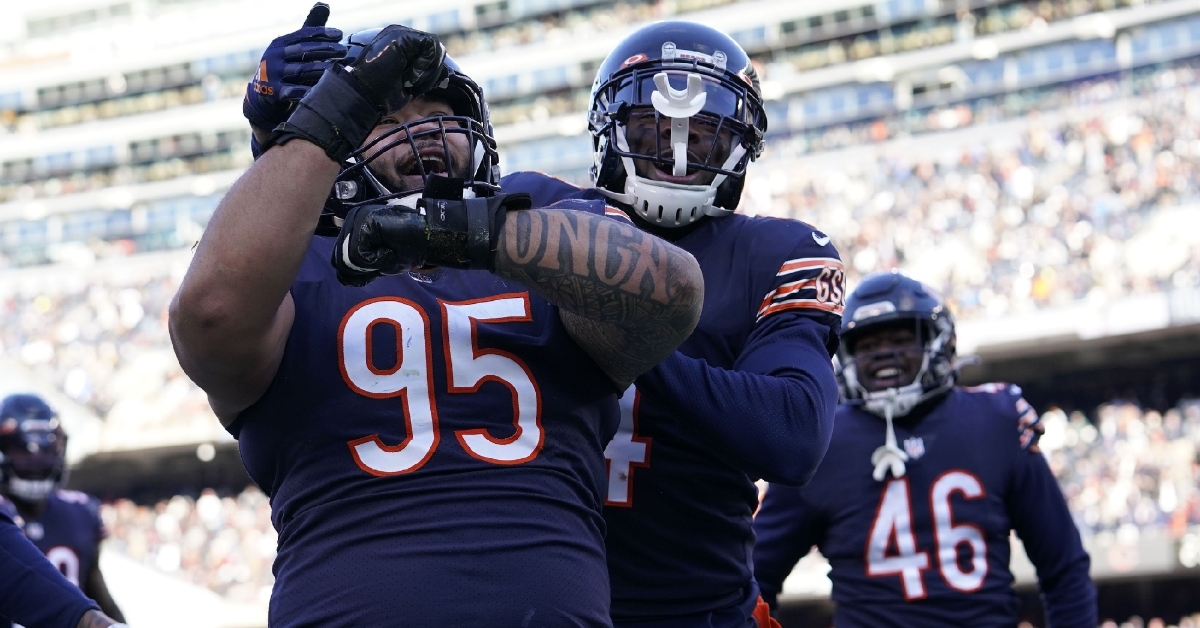 CHICAGO – As most fans expected, Matt Nagy not only is on the hot seat, but doesn't appear like he will be returning next season. Those expectations became a reality as reports around the team have said they plan to move on from the fourth-year head coach and go in a different direction.

Until that happens, the Chicago Bears (6-10) had two games left to play as they hosted the New York Giants (4-12) in what would be the home finale for the season. With Justin Fields still on the mend from his injury, Andy Dalton was back under center despite Nick Foles picking up a huge win last week. Dalton may not have been at his best going 18-35 for 173 yards, but it was the Bears defense who came up huge, limiting

Mike Glennon and the Giants offense to under 200 yards in the 29-3 victory.

Chicago couldn't have asked for a better start to their day Tashaun Gipson coming away with a strip-sack with Bilal Nichols recovering the ball inside the 15 and taking it to the two. One play later, David Montgomery plowed in for the score and a quick 7-0 Bears lead. As if the fumble on the first possession wasn't good enough, the Bears defense was at it again, Gipson making another play, this one via interception and returning it 31 yards to the 24-yard line.

Despite needing seven plays to go 24 yards, the Bears were able to add to their lead, with Dalton hooking up with Darnell Mooney from four yards out to make things 14-0. Across the next four possessions, two for the Giants and two for the Bears, neither team had a ton of luck as the teams combined for less than 60 yards and four punts. It may have taken the Giants midway through the second quarter, but their offense finally started to show signs of life.

Saquon Barkley combined for 18 yards on two carries to open the drive as the Giants moved the ball into Bears territory. Devin Booker followed that up with several carries, but the end result was a meaningless 39 yard Graham Gano field goal to make things 14-3. Following that field goal, the Bears offense not only responded, but responded with one of their better drives of the day, going 69 yards on 14 plays.

Montgomery played a massive part in that drive touching the ball five times in the first six plays before Dalton found Damiere Byrd for 23 yards to move the ball to the Giants 21 yard line. Several short runs by Khalil Herbert, Dalton, and Montgomery kept the ball moving, but the Bears had to settle for a 21 yard Cairo Santos Field goal to make things 17-3. Two plays into the Giants next possession, Chicago added to their lead with Angelo Blackson picking up a safety making things 19-3. A couple of nice passes to Mooney late in the first half set things up for Santos as his 44-yard field goal gave the Bears a 22-3 lead at the half.

Not only did the Bears finish the first half in a positive manner, but they started the second half the best way possible. What began with a nice Montgomery run and a short completion to Cole Kmet, Dalton went back to Mooney as he moves closer to a potential 1000 yard season. A couple more completions to Mooney and Allen Robinson moved the sticks again as the Bears offense came out flying.

Chicago was helped by a defensive pass interference later on the drive, which set things up for Montgomery, who plowed in for his second score of the day to make things 29-3. This was the final score of the afternoon for either side, as the rest of the game was filled with sloppy play on both sides. Out of 11 combined drives the rest of the way, there were only five punts, two from the Bears and three from the Giants.

The rest of the possessions resulted in turnovers, including another Gipson strip sack as he was all over on Sunday afternoon. With a chance to capitalize on that second fumble, Dalton was intercepted for the first time, giving the ball back to the Giants. That turnover resulted in a punt which was the theme for the rest of the second half.

New York had an opportunity to put up points later in the game before a turnover on downs killed any chance of that happening. Glennon was also intercepted later in the second half by Deon Bush as the Bears defense was all over the Giants offense from the start. Much like their first turnover of the second half, the Bears were unable to capitalize on that interception, going for it on fourth down and having a Montgomery pass attempt picked off.

That play happened with less than two minutes remaining as the Giants closed out the game with the ball before time expired in the 29-3 win. Despite being out of the playoff picture, the Bears continue to fight for Nagy as they have won two consecutive games. To go with Dalton and his 173 yards passing, Montgomery led the way on the ground with 64 yards.

Mooney continues to lead the receiving core with 69 yards as he puts himself in line for a 1000 yard season. Robinson chipped in with 35 yards while Kmet added 25 yards in a rather rough day offensively for both sides.