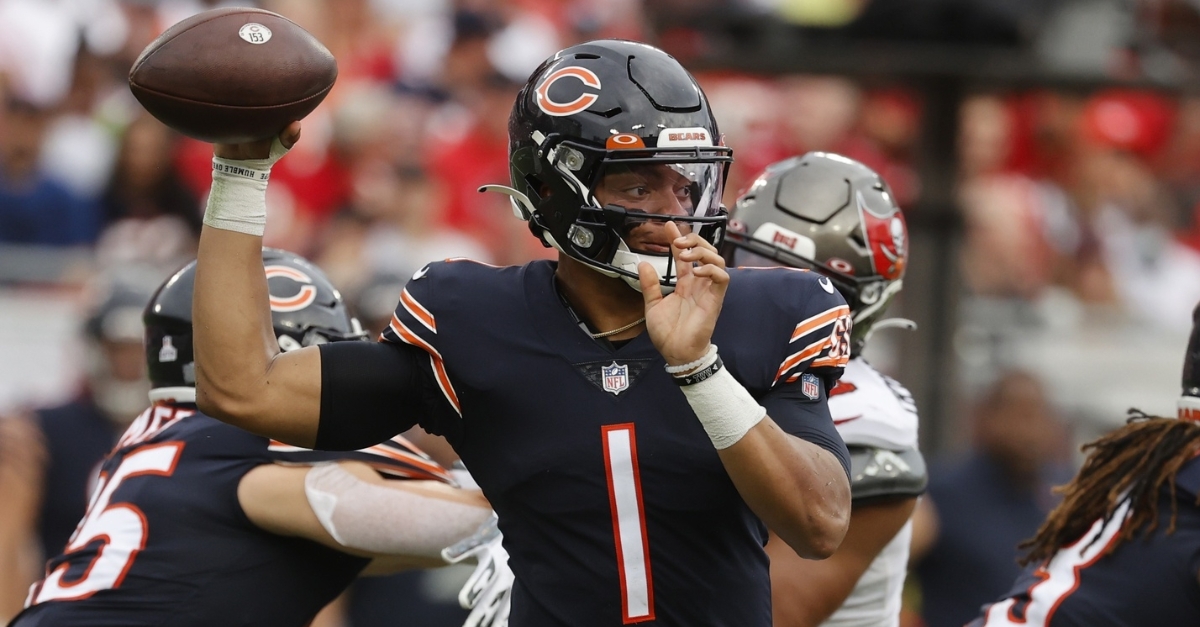 The San Francisco 49ers come into Chicago with their 2-4 record to take on the 3-4 Bears. The 49ers have lost four straight after starting the season 2-0, and the Bears have lost their last two.

Let's dive into each position group and see where Chicago may have an advantage:

Justin Fields is not playing well. He has his flashes, and you can tell the arm talent is there, but the "wow" plays have just not been there like we are all hoping. I still believe that this can be credited to the coaching staff not using him the correct way and not putting him in situations to succeed, but regardless of the reason, the results are not there right now. San Francisco is in a QB controversy, with starter Jimmy Garoppolo's play not being great thus far this year. The conversation started before the season started when the 49ers traded up to number two in the draft to take Trey Lance. Trey Lance is a raw prospect out of North Dakota State but has the tools to be a great runner and passer. I would not be surprised if Lance starts the second half if Garoppolo has a bad first half. Because of the controversy in San Francisco, I will give the Bears a slight advantage here, but I do not think either team would consider this position as a strength of their team at this point.

Khalil Herbert has played great since David Montgomery and Damien Williams have been out. He was able to be the lone bright spot in last week’s game, being the first 100 yard rusher against the Buccaneers defense all year. I expect the Bears to want to try and continue their run first mentality this week. The 49ers also have their injury issues at the running back position, a they now are starting rookie Elijah Mitchell. Head coach Kyle Shanahan is one of the better coaches in the league, especially with the run game. They have been able to roll out essentially anyone at the position since he took over the reigns and made them and effective runner. Still, the Bears have the advantage here with how well Herbert has been playing.

The Bears have talent in their top two wide receivers with Allen Robinson and Darnell Mooney, but the lack of having an effective passing game from both the gameplan and poor quarterback play has not allowed them to play to their full potential. Allen Robinson cracked the NFL’s top 100 player list, but only has 23 catches for 250 yards and one touchdown on the year. The talent is there while the production is not, but I do not put any blame on them for the lack of production. The 49ers best offensive player in the game will be Deebo Samuel. He is a dynamic player that gets involved in the backfield as well. The second and third options are last year’s first round pick Brandon Aiyuk and veteran Mohammed Sanu Jr. Stopping Samuel will be key for the Bears, but there is still more talent at the position for Chicago even with the lack of production.

The 49ers badly miss George Kittle at tight end as he continues to be on IR. He is a clear top two tight end in the league and also a game changing blocking. Stepping in his place is Charlie Woerner and Ross Dwelley, they have combined for only seven catches. Neither team will have an offensive threat come from tight end, as the Bears have Cole Kmet and Jimmy Graham. Cole Kmet has been a bit more involved which is nice to see, and I want to see that increase even more. Jimmy Graham has been non-existent. There truly is no advantage from either position here, but I will reluctantly take the Bears here because there is more potential.

The Bears' offensive line continues to play somewhere between terrible and average on a week-to-week basis. Not all the sacks let up have been on the line, as Fields needs to throw the ball away more instead of running backwards to lose those yards eventually. Even with the shaky play, the Bears are running the ball effectively. The 49ers have a very good offensive line, with a good mix of veteran and young players. They lean on this as a strength with their run-first mentality and then will play action over the top with the time given to the QB.

Chicago's defense was hard to evaluate overall last week because the five turnover game from Fields put them in a bad position over and over. Akiem Hicks may be able to make a return this week which will be much needed to stop the running game. The 49ers have two studs on their line in Arik Armstead and Nick Bosa. They are both very good in the run game and pass-rushing, and they are likely salivating at the opportunity to go against the Bears' offensive line.

The Bears will be without top passrusher Khalil Mack this week, but they do get Robert Quinn back from the Covid-19 list. Roquan Smith and Alec Ogletree continue to both play well on the inside and will be important players to defend against the run/play action gameplan San Francisco uses. Fred Warner is maybe the best middle linebacker in football and you will see him making a bunch of plays on Sunday. The 49ers have the best player at this position, but the Bears have a better overall unit.

The Chicago secondary did not have a great week, but it did come at the hands of the ageless Tom Brandy and one of the best offenses in football. They will not have as much of a challenge this week and will have multiple opportunities to force a turnover. The 49ers come in with an average secondary, and the Bears should try and attack them in the passing game.

Kicker Cairo Santos is still perfect on the year for the Bears. Former Bear Robbie Gould is still on IR, so Joey Slye continues to kick for San Francisco. The Bears will have this advantage until Santos misses a kick.