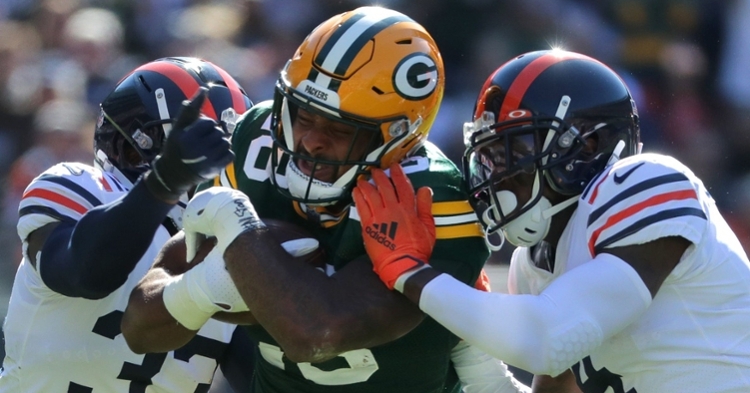 There was some good but a lot of bad on Sunday as the Bears have now dropped two games in a row. The Bears are now 4-9 after getting smacked 45-30 by the Packers.

So let’s take a look and give out some grades based on the performances by position after the loss to Green Bay.

Justin Fields returned from injury but you could tell he was not 100% healthy. It wasn’t his best game, but Fields was still very productive. Fields threw for 224 yards and two touchdowns, but also threw a pair of costly picks and fumbled. On the ground he was solid, carrying the ball nine times for 74 yards. It would be nice to see Fields continue to grow before the seasons’ end.

David Montgomery had just 10 carries for 42 yards and he added 6 catches for 39 yards in an underwhelming performance. Khalil Herbert was quiet, but spelled Montgomery with a carry. Damien Williams also garnered three catches. The Bears certainly need to keep them involved as much as possible.

The passing game was active, but the receivers were thin. Allen Robinson returned from injury but caught only two passes. Marquise Goodwin was also out with injury. Second year wideout Darnell Mooney caught just one pass for 19 yards. Jakeem Grant had one catch that he took 46 yards for an electrifying touchdown. Damiere Byrd also took a quick slant to the house, finishing with two catches for 76 yards and a score.

This unit certainly has talent but needs to show it better. Cole Kmet and Jimmy Graham handled the tight end duties for this squad, and Kmet caught 3 passes for 17 yards. Graham was targeted a handful of times, and caught two passes for nine yards. I’d like to see of this as the year progresses.

The offensive line was iffy, allowing just 2 sacks of quarterback Justin Fields but also struggling to create holes in the running game all day long. This unit was frequently penalized, but they were overall okay on Sunday.

The defensive line was bad. They were not effective against the run or putting pressure on Aaron Rodgers. This unit came away with one sack from Trevis Gipson.

Any unit that boasts Khalil Mack deserves some props, but Mack is out the rest of the year. Roquan Smith had 9 tackles but did not do anything special. The rest of the unit was not very involved — beside Robert Quinn having two sacks. Need this unit to step up.

This unit was not great on Sunday. The Bears needed this unit to make a play to change the game and they were not able to deliver. Eddie Jackson was back and had nine tackles, but the Bears were not able to make the big play. Jaylon Johnson was good against Da’Vantae Adams, but nobody else could stop him.

The play calling was terrible. David Montgomery was abandoned in the second half and Justin Fields was not given enough of a chance to succeed. All of that and the Bears decided not to go for it at a crucial time. There was just some overall discombobulation that I blame on a coaching staff that spends most of the week answering questions about job security.

Nonetheless, week 14 is in the books and the Bears are 4-9. They continue the season on next Monday against the division leaders and rival Vikings.