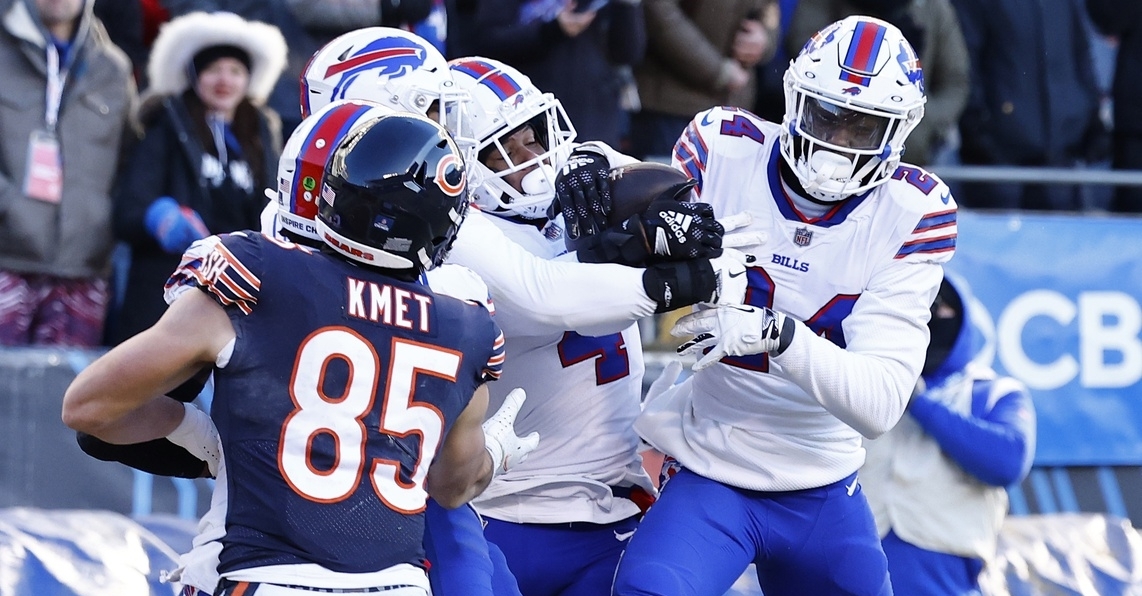 The Bears were fresh off a loss to the NFC-leading Eagles and welcomed the AFC’s best team. The Bears hung around but once again dropped a high scoring affair in Chicago, this time to the Bills, 35-13.

So let’s take a look and give out some grades based on the performances by position after the loss to the Bills.

Justin Fields was back under center for the Bears and once again showed dynamic flashes. Fields was accurate, completing 15-of-23 passes for 119 yards, and one touchdown, and no interceptions. Fields did not impact the game much with his legs, running for just 11 yards. Fields took some big hits though, and Nathan Peterman finished the game under center and threw an interception.

The Bears may not be winning games, but they certainly have their quarterback.

David Montgomery was good on the ground, carrying the ball 16 times for 62 yards. He also caught four passes for 22 yards. Khalil Herbert was back from injury and carried the ball six times for 7 yards, and had two catches for a negative gain. The Bears will hope to keep the running game involved as the season continues, as they are the NFL’s No. 1 rush offense.

The passing game was forced to be active against such a high powered team, and the Bears were without their top pass catchers in third year wideout Darnell Mooney and newly acquired Chase Claypool. Velus Jones led the way with two catches for 52 yards and Byron Pringle was right behind with two catches for 34 yards.

Equanamius St. Brown also missed the game, but Dante Pettis had two catches for 11 yards and a touchdown. The Bears certainly have much more work to do.

This unit certainly has talent with Cole Kmet and Ryan Griffin, but they have not been that active. Cole Kmet led the Bears with five catches for 27 yards.

The offensive line was okay, as they were up against one of the NFL’s top defenses. They need to do a better job of keeping Justin Fields upright as he was sacked twice times, but they partially made up for it in the run game by opening holes for Montgomery and Fields all game long.

The defensive line was not good. The D-line allowed big play after big play in the run game and did not muster up nearly enough pressure on Josh Allen.

Roquan Smith has been traded to Baltimore, Robert Quinn is now an Eagle, and this unit is depleted. They sure looked like it on Sunday.

This unit was great on Sunday. Eddie Jackson and Jaylon Johnson were out, but the Bears generated two interceptions and a sack from the unit. Kyler Gordon and Jaquan Brisker look to be pieces the Bears can rely on in the future for sure.

Kicker Cairo Santos made two field goals and an extra point. Trenton Gill nailed one of his four punts inside the 20. The Bears did have nearly 125 return yards on Sunday though, in five tries.

Nonetheless, week 16 is in the books, and the Bears are now 3-12. Next on the schedule is another tough foe, the Detroit Lions.