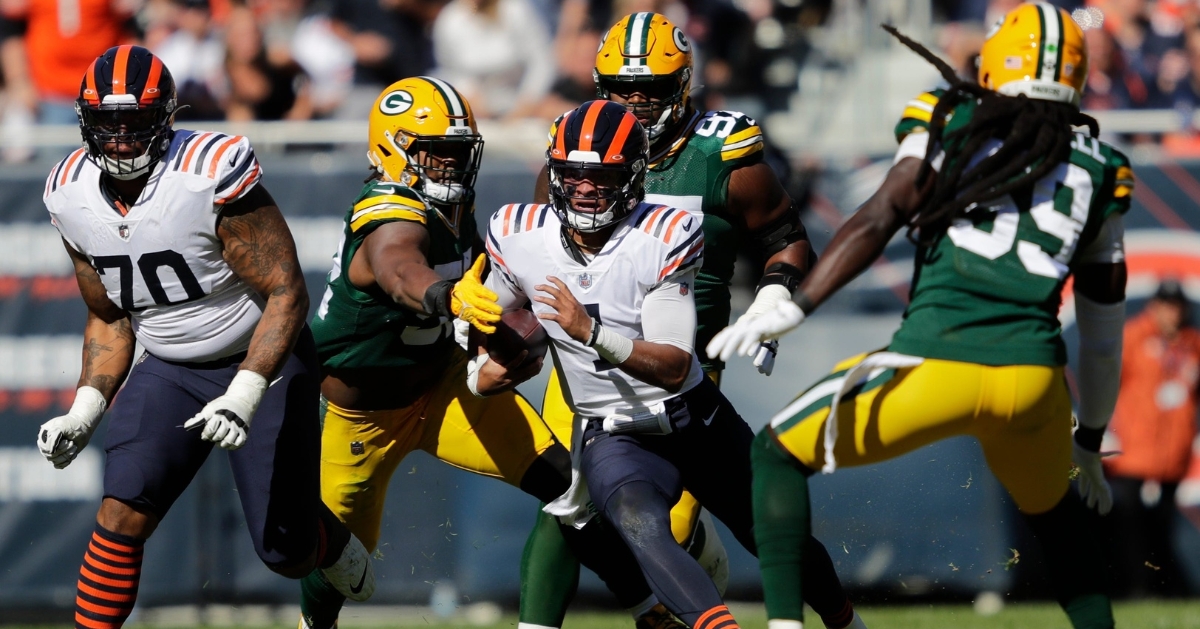 After two straight wins, the Bears are unfortunately back in the loss column. The Bears are now 3-3 after losing to Green Bay 24-14 at home.

So let’s take a look and give out some grades based on the performances by position after the loss against the Packers.

Justin Fields got his fourth career NFL start on Sunday and he had his share of struggles. While it can be partially blamed on the officials, Fields threw an interception and took four sacks. There were a few occasions where it seemed like Fields needed to throw the ball away when he took sacks, but overall he did make some plays. Fields was 16/27 for 174 yards and a touchdown to Darnell Mooney, plus he gained 43 yards on the ground. Definitely some room to grow for Justin Fields.

With David Montgomery out and Damien Williams out, it was Khalil Herbert who carried the workload on Sunday. Herbert racked up 19 carries for 97 yards and a touchdown. He also caught two passes for 15 yards. The Bears certainly need to keep them involved as much as possible.

Only three Bears wide receivers caught passes on Sunday, but the ones who did were okay. Allen Robinson had four catches for 53 yards, and that wasn’t the best the Bears had to offer. Second year wideout Darnell Mooney caught five passes for 45 yards and a touchdown. Marquise Goodwin also was targeted, that was completed for 12 yards.

This unit certainly has talent, with Cole Kmet and Jimmy Graham handling the tight end duties for this squad, but they’ve been quiet this year. This unit was better on Sunday though, with Kmet catching four passes for 49 yards. Graham was not targeted. I’d like to see more out of this unit as the year progresses.

The offensive line was okay, allowing four sacks of quarterback Justin Fields but creating holes in the running game all day long. Some sacks were after a lot of scrambling, so I will give them a break. But it was a step in the right direction on Sunday.

The defensive line was solid, keeping the Bears in this game and pressuring Aaron Rodgers and the Packers. Akiem Hicks was back from injury and picked up a sack. The unit did allow over 150 total rushing yards, though, something they need to be better at.

Any unit that boasts Khalil Mack deserves some props, and this position group certainly delivered on Sunday. Khalil Mack had a sack his seventh of the season and Robert Quinn picked up a sack as well. . Roquan Smith had 12 tackles as well. This unit is very good and looked like it on Sunday.

This unit was not very good on Sunday. The Bears needed this unit to make a play to change the game and they were not able to deliver. Jaylon Johnson did alright working on Davante Adams but Eddie Jackson struggled in some tackling. This unit must be better.

Kicker Cairo Santos delivered a two made extra points. The return game was solid with Jakeem Grant Sr. and the punt unit was active, punting the ball four times, three inside the twenty.

The play calling was fine on Sunday, mostly because Matt Nagy’s incompetence was not calling plays. It was Bill Lazor instead. The Bears finally got Justin Fields moving and allowed his skillset to show — as well as pounding the ball with the run game. More of that all would help the Bears exponentially as the season continues.

Nonetheless, week five is in the books, and the Bears are 3-3. They continue a very tough part of the schedule, including the reigning Super Bowl Champion Bucs this week.