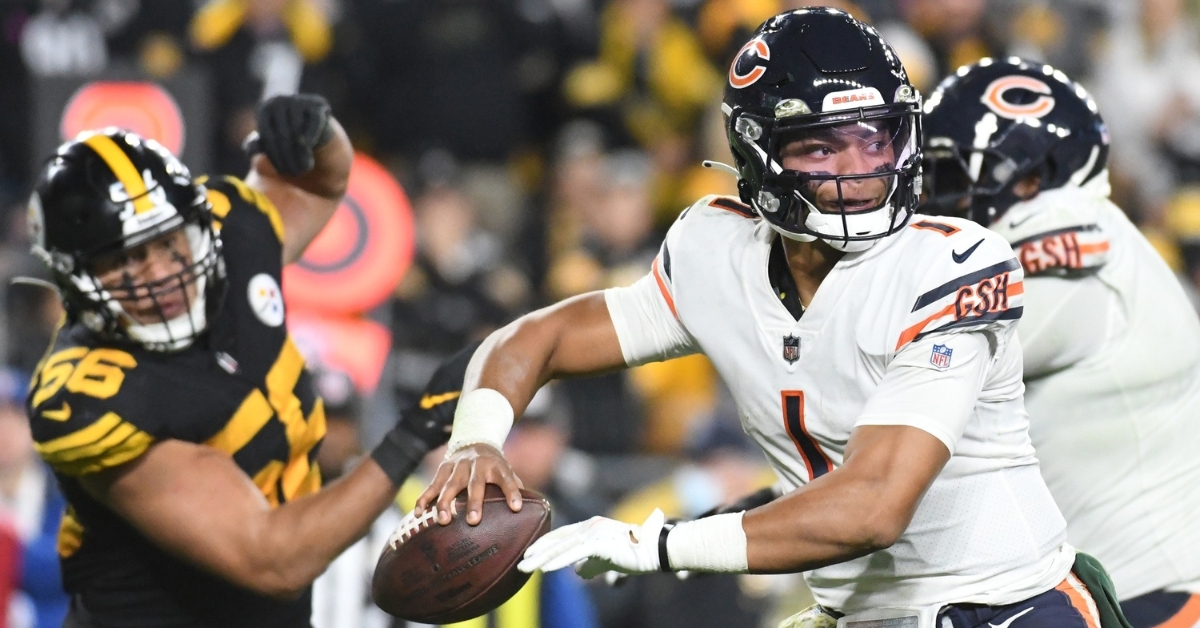 There was some good and some bad on Sunday as the Bears lost their fourth straight, falling to Pittsburgh. The Bears are now 3-6 after losing to the Steelers 29-27 at Heinz Field.

So let’s take a look and give out some grades based on the performances by position after the loss against the Steelers.

This was by far Justin Fields’ most impressive game as a pro. Despite having the relentless pass rush of the Steelers on him all game long and officials the rookie threw for a career-high 291 yards and a touchdown, whilst also orchestrating a go-ahead touchdown drive with under two minutes to play. Fields did throw one interception early. He also had one of his best rushing games as a pro, tallying over 40 yards despite taking three sacks.

Justin Fields aired it out all night, averaging 15.6 air yards per attempt (2nd-most by any QB in a game this season).

His 7 completions on balls 15+ yards downfield are tied for the most by a Bears QB over the past 15 seasons. pic.twitter.com/PslBNt2D9a

With David Montgomery coming back from injury the running back room was bolstered. Montgomery had 13 carries for 63 yards and added a pair of catches for 17 yards. Khalil Herbert was quiet but spelled Montgomery for 13 yards. The Bears certainly need to keep them involved as much as possible.

The passing game was much better, so were the receivers. Allen Robinson had four catches for 68 yards, and that wasn’t the best the Bears had to offer. Second-year wideout Darnell Mooney caught three passes for 41 yards and a touchdown — he also added a 15 yard rush for a touchdown out of the wildcat. Marquise Goodwin also had a long catch for 50 yards.

This unit certainly has talent and finally showed it on Monday. Cole Kmet and Jimmy Graham handled the tight end duties for this squad, and Kmet caught six passes for 87 yards. Graham was targeted a handful of times, including a 28-yard catch. He also had a touchdown called back due to a penalty. I’d like to see more out of this unit as the year progresses.

The offensive line was bad, allowing three sacks of quarterback Justin Fields but creating holes in the running game all day long. It could partially be blamed on coaching, but the Bears were out of sorts on the offensive line all game long. Not to mention, the unit accounted for six of the Bears' 10-plus penalties.

The defensive line was bad. While they did a solid job stopping Najee Harris, they committed a bunch of penalties and did not come away with a big play.

Any unit that boasts Khalil Mack deserves some props, but Mack went down with an injury last Sunday and was out. Roquan Smith had 12 tackles and a sack, and the rest of the unit was very involved — including a sack from Cassius Marsh after being called up from the practice squad.

This unit was not very good on Sunday. The Bears needed this unit to make a play to change the game and they were not able to deliver. Without Eddie Jackson, the unit only allowed 203 passing yards but had a few big plays where they got burned. This unit must be better.

Kicker Cairo Santos delivered two made field goals and two pats but missed a 66 yarder as time expired. The Punt unit was active, punting the ball five times and landing inside the 20-twice. Jakeem Grant was solid in the return game, but also coughed up a fumble on his longest return. However, the unit recovered with a Deandre Houston-Carson scoop and score on a punt in the fourth quarter.

The play calling was fine without Matt Nagy on Sunday, as I think the offense was able to use Justin Fields better than he had been used. However, the Bears' defensive line and offensive line were not good at all on Sunday. Their undisciplined actions and careless penalties will make any game hard to win.

Nonetheless, week nine is in the books and the Bears are 3-6. They continue a very tough part of the schedule after the bye week which includes the Ravens.